Ukraine is a state in Eastern Europe Featured 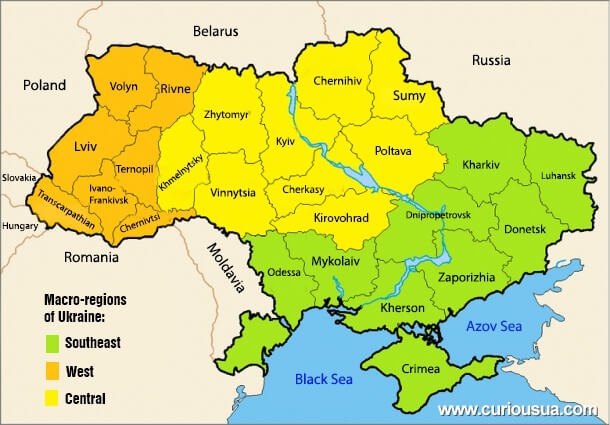 The map of Ukraine is divided into macroregions and regions and presents the borders with other countries. Photo edited by Borys Frenkel.

Ukraine is an industrial-agricultural country and is in first place in terms of size among the countries which lie entirely in Europe.

Since 1922, Ukraine was one of the Soviet republics. August 24, 1991 the country's independence was proclaimed. From the Ukrainian Soviet Socialist Republic, Ukraine inherited the membership of the United Nations and UNESCO (1945), Commonwealth of Independent States, CIS (1991), OSCE, IMF and World Bank (1992), the Council of Europe (1995), GUAM (Organization for democracy and economic development - Georgia, Ukraine, Azerbaijan and Moldova, 1997), WTO (2008), the program 'Partnership for peace' and other international organizations.

Ukraine had the third largest stockpile of strategic nuclear weapons after USA and Russia (1991-1996).

State form. Ukraine – unitary state and parliamentary-presidential republic. The most important law in the country is the Constitution. The head of state – the president – is also commander in chief of the Armed Forces of Ukraine.

Legislative power. The only organ of this part of the power is Verkhovna Rada.

Form of Government. Ukraine - parliamentary-presidential democratic republic, in which legislative, executive and judicial powers are separated.

Administrative division. In Ukraine there are 490 districts, 459 cities, 885 urban settlements and 28,450 villages and other populated places.

The country is divided into 24 regions (oblasti called on Ukrainian), has two cities of national importance (it is cities with special status – Kyiv and Sevastopol) and the Autonomous Republic of Crimea. The capital of the autonomy is the city of Simferopol.

Unofficially Ukraine is also divided in the historical area and land area.

The capital of Ukraine is Kyiv. Other major cities are Kharkiv, Dnipropetrovsk, Lviv, Donetsk and Odessa.

State symbols. Ukraine has three state symbols – the flag, the coat of arms and the anthem.

The country's land area is 603,628 km2, which is 5.7 % of the entire European territory and 0.44% of the world's land. Ukraine is number 44 in size among the world's countries, and first among the states which are entirely located in Europe.

Geography. Ukraine borders with seven countries: Russia to the east and northeast, Belarus to the north, Poland, Slovakia, Hungary in the west, and Romania and Moldova in the southwest. The river Dnipro divides the country in the Left Bank and the Right Bank.

Economy. Ukraine is an industrial-agricultural country and is considered to be export-oriented. Although there is a market economy, the State owns part of the large companies in various sectors of the national economy, as well as it controls the prices of some goods.

The national language of the country is Ukrainian. On 3 July 2012 the Verkhovna Rada adopted a bill confirming Ukrainian as the national language. Legally, local governments got the power to give official status to other languages, including Russian, if the language is spoken by at least 10% of the region's population.

Religion. Ukraine is a secular state (separation of church and state and the decisions of the state institutions can not have a religious motivation). The Constitution guarantees freedom of religion.

60% percent of people in Ukraine do not consider themselves believers or do not attach importance to faith. The vast majority of the religious population is Christian. A significant part of the Ukrainian Christians are Orthodox, and belong to the Ukrainian Orthodox Church of Kyiv and Moscow Patriarchate and the Ukrainian Autocephalous Orthodox Church.

There are also Greek Catholics among the believers, Protestants, Jews and others.

Read 3153 times Last modified on Thursday, 27 December 2018
Published in About UA
Tagged under