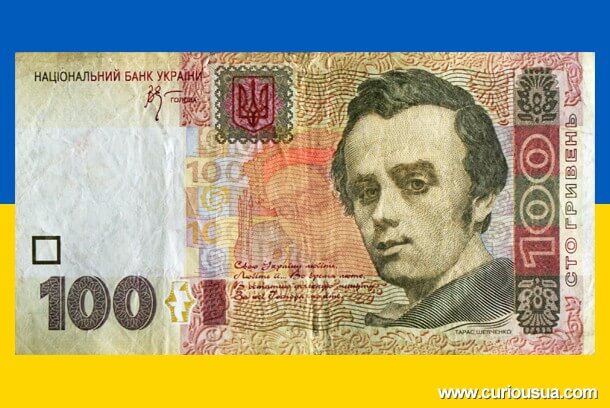 The Ukrainian currency got its name in honor of the old currency. Hryvnia became the national currency 2. September 1996.

Etymology of the word "hryvnia"

The currency, which was used in the historical Kievan Rus in the 11th century, was called hryvnia. The word was used along with the ruble, which was a sub-unit of the hryvnia – ruble can be seen as a derivation of rubit that means to cut off, so it is a cut off (of one hryvnia).

Later, the word was used to describe silver or gold bars of a certain weight. There is also a possibility that the word is derived from a Lithuanian (parts of modern Ukraine has previously been part of the Grand Duchy of Lithuania) ”grynas pinigas” or ”gryni pinigai” (cash), where ”gryni” means "cash, pure gold".

Currency Signs of the Ukrainian currency

Hryvnias character is cursive of the Ukrainian letter He (г) with a double horizontal stroke, symbolizing stability similar to what is used in other currency symbols such as ¥ or €.

The sign ₴ was coded as U 20 B4 in Unicode 4.1 and released in 2005. It is now supported by most computer systems. It is still rarely used in Ukraine, instead the abbreviation ”грн.” is perferred.

About the hryvnias history in Ukraine

In 1917, after the Ukrainian People's Republic declared its independence from the Russian Empire, the name of the new Ukrainian currency was hryvnia, a revised version of the hryvnia from the historic Kievan Rus. The designer was Heorhiy Narbut.

Subsequently hrynia was withdrawn from circulation by the money reform in 1922-1924.

Hryvnia replaced the transitional karbovanets currency used in connection with the phasing out of the Soviet ruble in the period from 1992 to September 1996. The transition to the hryvnia was due to karbovanets value had been eroded by hyperinflation in the early 1990s after the Soviet collapse. The exchange rate was 100,000 karbovanets for one hryvnia.

Chairman of the National Bank

Hryvnia was introduced in the period when the later President Viktor Yushchenko was chairman of Ukraine's National Bank (NBU). But the first banknotes issued got the signing of the former National Bank Chairman, Vadym Hetman, who retired in 1993, when the first notes had been printed in 1992 by the Canadian Bank Note Company, but it was decided to postpone their circulation until the hyperinflation in Ukraine was brought under control.

Development of the exchange rate

In February 2014 NBU released unexpectedly the official exchange rate of hryvnia, and refused for a year to hold currency auctions, and went from a fixed exchange rate to floating. Now the national currency of Ukraine is determined against the dollar and other currencies of the inter-bank foreign exchange market. This led ultra fast to a cheapening of the Ukrainian currency, which reached a historic low level –  30.01 UAH / USD at the NBU's exchange rate on February 26th 2015. In March, we managed to stabilize the exchange rate at the level of 21-23 hryvnia per dollar. At the end of the year it was about 24 UAH / USD.

Read 2715 times Last modified on Friday, 20 May 2016
Published in About UA
Tagged under