The Autonomous Republic on the Ukrainian peninsula Crimea 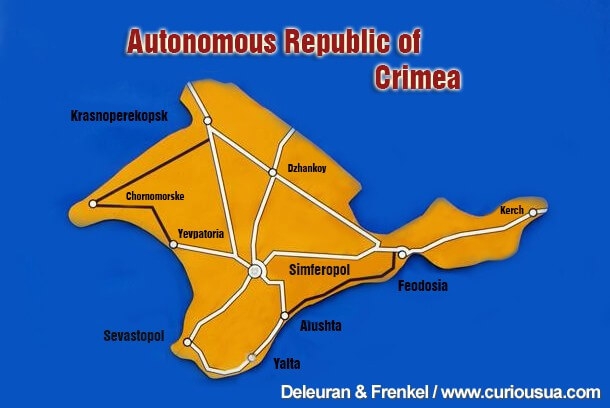 The Crimean Tartars homeland is rich in history and nature and at the same time tragic events that affected the indigenous people of Crimea.

The Crimea region was transferred to the Ukrainian Soviet Socialist Republic on April 26, 1954. Some scholars believe that the transfer of Crimea was a necessary measure due to the difficult economic situation on the peninsula. It was the result of post-war devastation and labor shortages, after the Crimean tatars were deported. Russian people who arrived from many regions simply did not have the necessary knowledge and skills to develop economic activities in the peninsulas steppe zone. Others believe that Nikita Khrushchev by means of a transfer of Crimea tried to change the ethnic composition of the Ukrainian SSR in the direction of increasing the proportion of the Russian-speaking population.

Crimea – a subject of controversy

In spite of the signed agreement on the state border between Russia and Ukraine, the largest part of Crimea is today a subject of territorial disputes between the two countries. Only the northern part of Arabat Spit, which administratively belongs to Kherson region in Ukraine, are not a subject to controversy.

During the political events from February to March 2014 Crimea's Verkhovna Rada unilaterally proclaimed the peninsula's independence and based on results of the unrecognized referendum in Crimea de facto annexation of Crimea and the city of Sevastopol happened by the Russian Federation.

Ukraine does not recognize the legitimacy of that Crimea has been put under Russia and consider it as a fact that Russia has annexed the territory of Crimea and Sevastopol. March 27, 2014 UN General Assembly adopted a resolution on support for Ukraine's territorial integrity within its internationally recognized borders.

The representative organ is the Verkhovna Rada of The Autonomous Republic of Crimea (VR ARK). March 15, 2014, in connection with the Russian seizure of the peninsula, Verkhovna Rada of Ukraine prematurely stopped ARK VR's powers.

In accordance with the administrative division of Ukraine, most of the Crimean peninsula is ARK, with the exception of the south-western part, which is subordinate to the Sevastopol city council, which is an administrative and territorial unit of national subordination, and the northern part of Arabat Spit, which is part of the Kherson region. Thus, the ARK area make a total of 26,081 km².

Geography. The peninsula is bordered to the south and west of the Black Sea and to the east of the Azov Sea. To the north it is connected to the mainland by the narrow, up to 8 km, Perekop Isthmus. The area of the Peninsula is about 26,860 square kilometers, of which 72% is flat land, 20% are mountains (the highest mountain is Roman-Kosh – 1,545 m), and 8% are lakes and other water areas.

Borders. The total length of the peninsula's land and sea borders are more than 2,500 kilometers.

Read 3398 times Last modified on Friday, 20 May 2016
Published in Crimea
Tagged under