Vareniki with cabbage: a way from a festive to a trivial dinner Featured 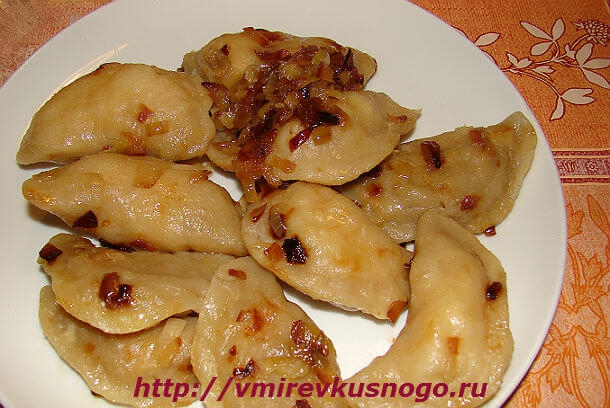 Vareniki can have different kind of filling. Vareniki with cabbage is only one example.

Vareniki was not an everyday dish for Ukrainian peasants. This dish was a treat for a Sunday or a holiday meal.

Vareniki was cooked for the breakfast for a newly wife the next day after the wedding and also for a new mother right after the child was born. Serving people usually said, «To be as full as vareniki». It was a simbol of continuing the family line.

Vareniki stuffed with cheese and served with sour cream was a traditional dish for Pancake Week as well as pancakes and crepes. Now-a-days it is a trivial dish for most Ukrainians, vareniki can be made at home or bought frozen in a grocery store. Vareniki with cabbage is a tipical dish during Lent when people give up eating meat.

The method of preparing vareniki is the same. The dough and filling can be different, though. Today we introduce vareniki stuffed with cabbage.

Heat oil in a medium size sauce pan. Add minced onion and shredded carrot. Cut into strips the cabbage and add to the pan. Mix well and cook under medium heat. Do not cover the pot otherwise the vegetables give too much liquid away. Add salt and/or seasoning to taste and simmer until cooked. Remember, cabbage deacreases in size during cooking. Take it into consideration estimating how much cabbage is required. 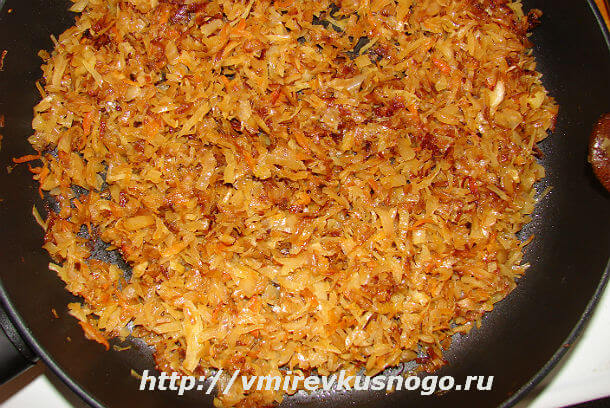 While the filling is getting ready, prepare the dough. Put the flour in a mixing bowl and make a well. In a cup mix water and salt. Bring the flour and water together into a rough ball and kneed. Add some flour if needed but not too much. The dough should be neither too tight (it will be too difficult to work with it) nor too soft (vareniki won’t hold their shape).

Roll the dough into a round ball, wrap it and set aside for a half hour. Meanwhile heat oil in a frying pan, add chopped onion and cook until the onions are just translucent. Cooked vareniki will be garnished with it .

When the filling is ready, let it cool off a little.

Kneed the dough for about 2 minutes or until smooth. Sprinkle some flour and roll the dough into a long, thin roll. Cut it into small balls and roll each of them into a thin, flat round shape with a rolling pin (about 2mm thick). Keep them covered in flour to avoid sticking.

Place one flat piece of the dough on one hand and place about 1 tsp of the filling at the center. Fold it in half and start to seal from one side by folding/crimping. Repeat the process until you run out of dough or filling. 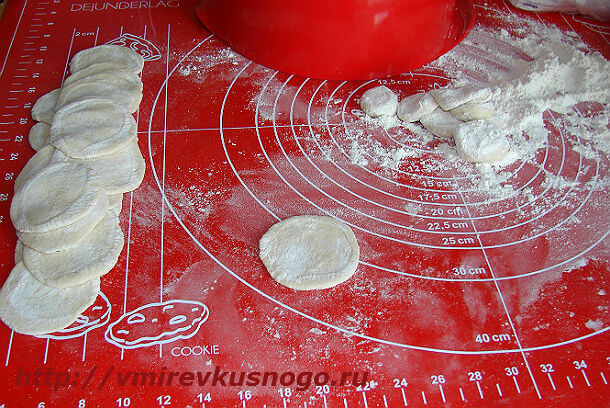 Boil some water in a large pot. Add salt and vareniki. Don’t put too many of them. If it’s too crowded they will stick to each other and won’t cook well. To know how many vareniki you can cook at once, put one layer of vareniki on a plate with the same diameter as the bottom of the pan. If you need to cook more, boil each amount separately. 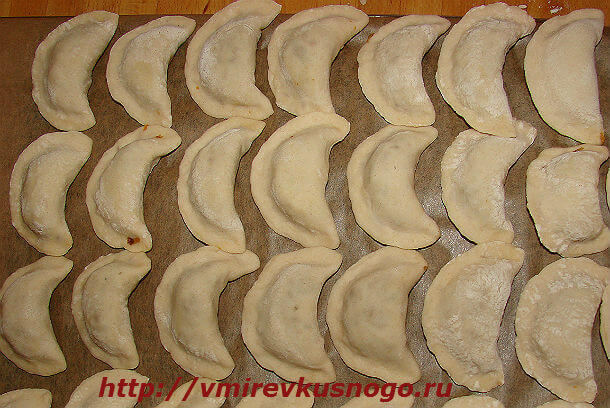 When you added vareniki to the water, keep the heat high until water starts boiling again. Stir carefully a couple times to prevent sticking to the pot. Reduce the heat to medium. Once vareniki are fully cooked (takes about 1 minute), remove from the water and serve with prepared onions to garnish.