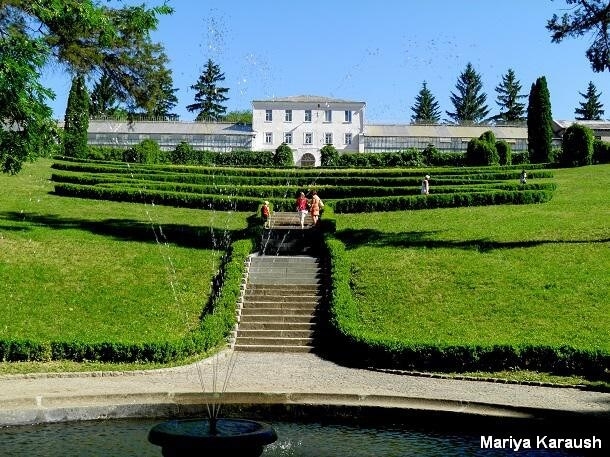 One of Ukraine's pearls is Sofiyivka Park, unmatched human work that does not leave anyone indifferent.

The natural beauty is combined with technical inventions and ancient architecture, which means that the park is not only unusual but perhaps the favorite holiday destination for many adventurers.

Sofiyivka is the National Arboretum. Almost half a million people from all over the world come here every year to see the unique monument of landscape art from the end of the 18th to the first part of the 19th century.

More than two thousand species of plants, including rare and endangered species can be found in the park. 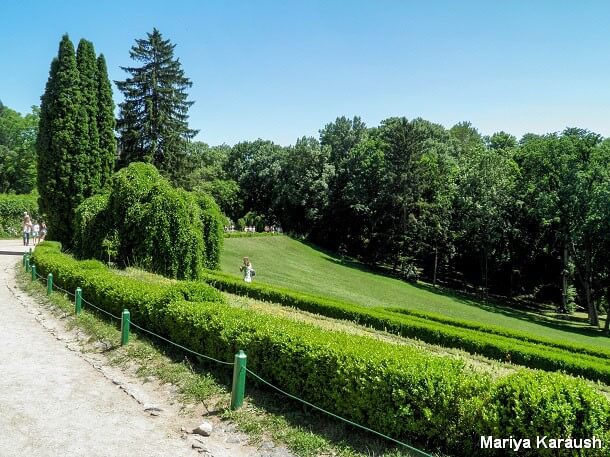 A few words about the history

Sofiyivka Park was founded by the owner of the city of Uman (the Cherkasy region), the Polish magnate Stanislaw Potocki in 1796. He built it as a gift to his Greek wife, Sofiya Vitt-Pototsky, and named it in honor of her.

The whole beauty was created in a terrain with almost no trees and with many gorges and clefts through which the Kam'yanka River runs.

Many couples come here to take wedding pictures because the landscape is really fascinating: manually a number of waterfalls and ponds have been created, it is decorated with artificial rocks and caves with such interesting names as «Distress» (Gorishok in Ukrainian), «Fear and Doubt» and «Venus», as well as pavilions, and a large number of fountains and ancient sculptures. 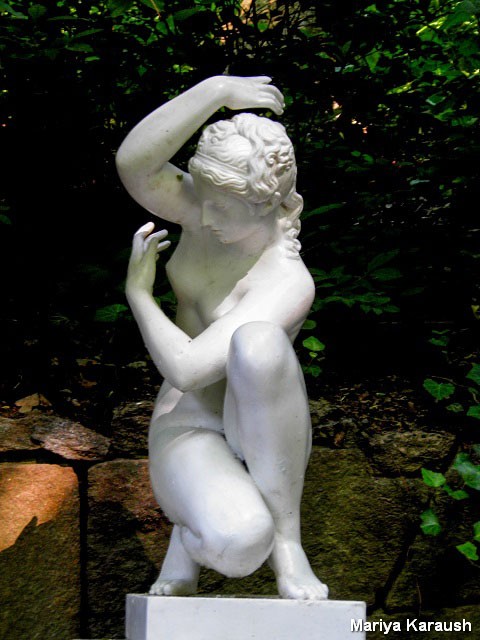 A statue of Venus during bathing.

The main entrance to the park is made as the entrance to the Athens market, and details on the watch tower resemble the shape of the temple of the goddess Vesta in Italy.

There is also the Venice Bridge with granite columns, The Champs Elysées, The Giants Valley, The Cretan Labyrinth and the English Park. There are heart-shaped stones near where the lovers express their wish to never leave each other.

In the northeastern part of Sofiyivka is the Upper Dam, where The Love Island is, which is planted with exotic plants. It is interesting that the island is made by hand, and the oval shape is not by a mere chance. 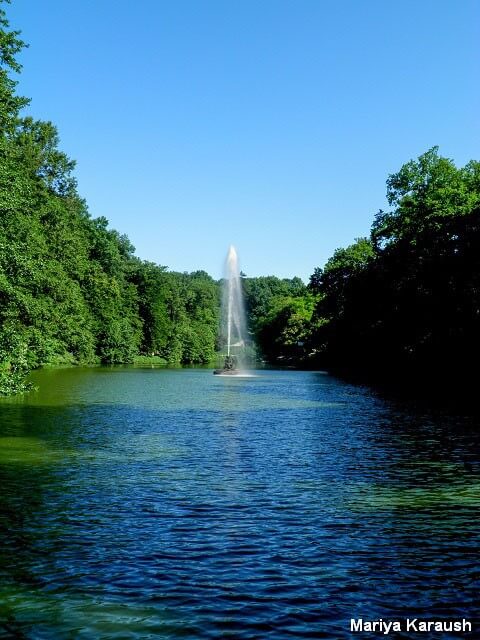 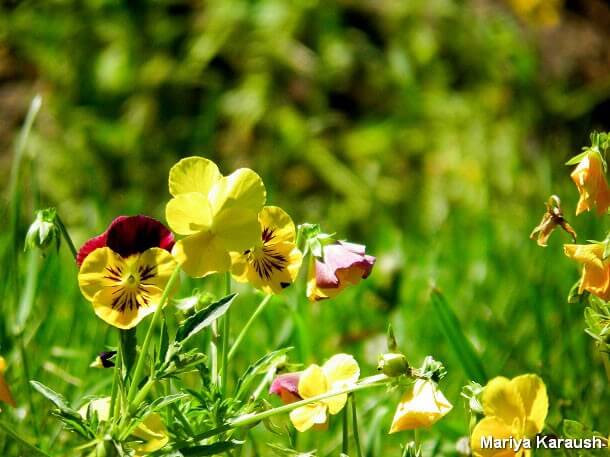 Lovers of botany and zoology will be delighted by: a large number of plants that can be studied for hours, unusually shaped trees, many flowers from which it is simply impossible to tear oneself away. 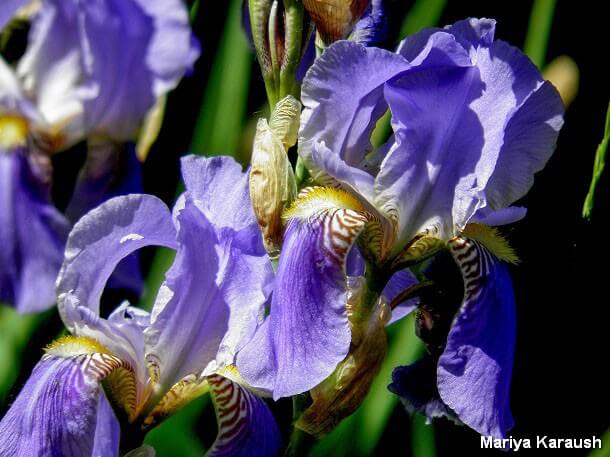 There are also many different insects and butterflies, and near waterfalls live ducks and swans that you can feed. 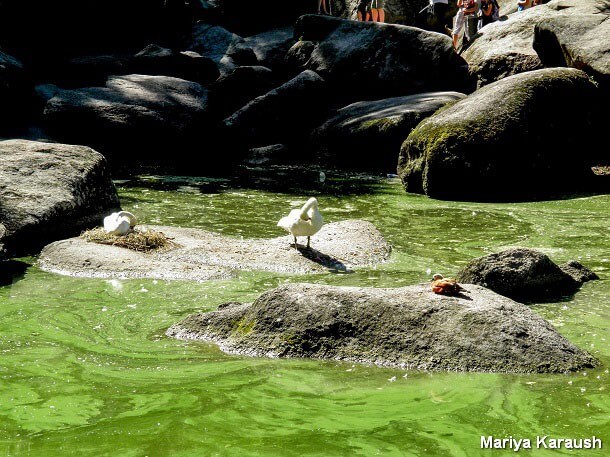 Tourists should always have some food for the lal residents swans and ducks.

On the avenue just after the entrance to the park visitors will be greeted by Ukrainian musicians in national suits. They sing songs, talk to tourists and enjoy to be taking pictures of. 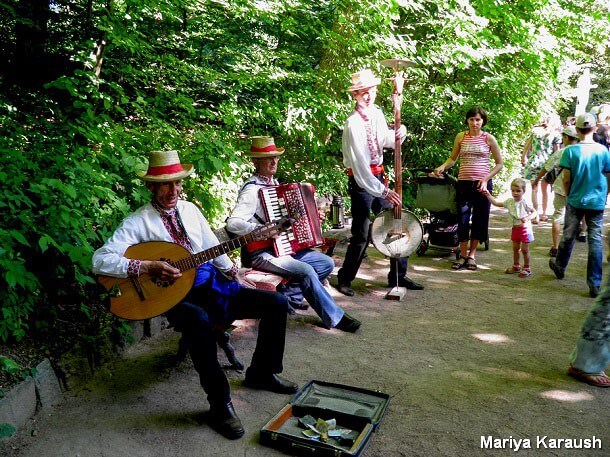 Ukrainian musicians in the old national costumes play and sing the old songs.

In the middle of the park there is a small town with Ukrainian souvenirs, where everyone can find unusual things like a present for themselves and relatives. For example, national suit, embroidered wallet or books about the founding of Sofiyivka Park. 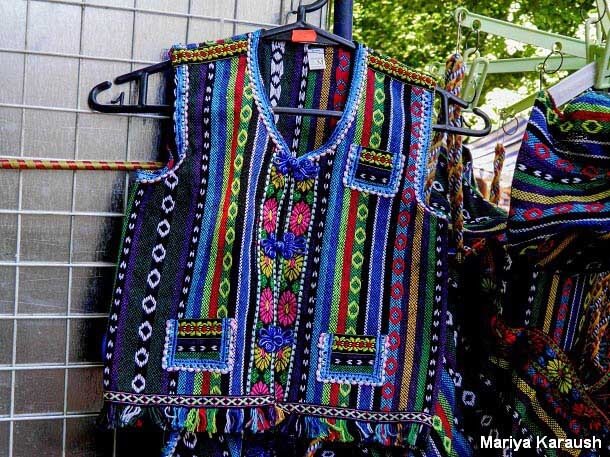 Words can not convey all the greatness and beauty of this place, maybe one day is not enough to enjoy the sight of every waterfall, statue, cave or fountain. But those who will come here and want to walk on the park's avenues and trails will be happy. 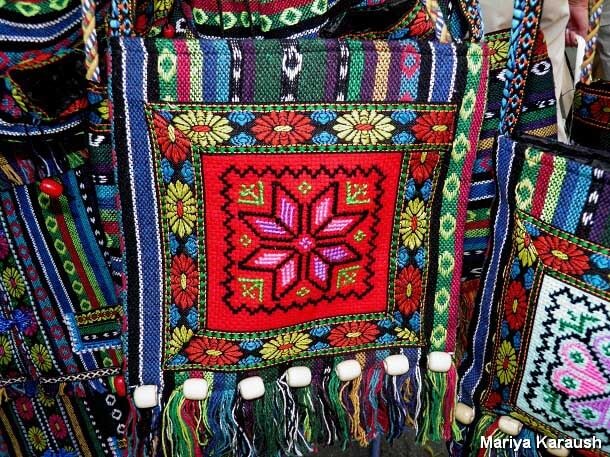 The park is open daily from 9:00 a.m., and after 18:00 p.m. the entrance to the park is for free. For those who want to hear about Sofiyivka's history, there are guides who guide tours in foreign languages. 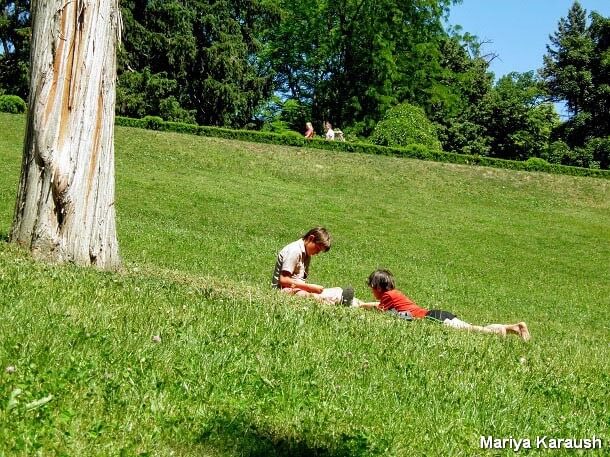 Visitors to the park can relax on the green hills.

In addition to trips, the park has horse and hiking tours, as well as ferry, gondola, rowing boats and catamarans, not only through the countryside but also on the underground river. Adventurers will be happy to make a souvenir photo in a fashionable 19th-century suit.

If you forget the camera – don't mind. In the park there are photographers who can print photos in 5 minutes.

There is also a café, a hotel, a sauna and even a conference room.

It is possible to get to the park by bus from the city bus station. Sofiyivka Park is located in the northern part of the city of Uman, the Cherkasy region, at Kyivs'ka street, 12-a.